Mission Hills is home to more than 400 individual business license holders. A long history of good design, diverse commerce, historic preservation, and community enhancements set the stage for this charming neighborhood of unique businesses and lovely residences. Active community volunteers representing business owners and residents give of their time and talent with a strong sense of community ownership. This instills a sense of pride and place.

Looking for fine dining? Wanting to update your wardrobe? Needing to change the look of your home and garden décor? How about a not to be duplicated hostess gift? Might personal beauty services give you the lift you want? Businesses offering all of these abound in Mission Hills!

The Mission Hills BID (Business Improvement District) is always looking to partner, expand, and provide resources to businesses and other community organizations that keep the economic climate strong.

Interested in being a part of making Mission Hills an exciting place to live, work, shop, dine, and relax?
GET INVOLVED

What is the Mission Hills BID?

The Mission Hills Business Improvement District was organized and established through the combined efforts of the local business owners and the City of San Diego’s Community and Economic Development Department in March 2004.

The purpose of the Mission Hills BID is to improve the overall business climate of the commercial area through a committee system that includes: Promotions, Economic Development, Design, and Mission Hills Parking Advisory committees.

Our monthly meetings agenda focuses on actions that:

An elected board of directors, consisting of local business owners holding a current business license within the above described boundaries, and an executive director provide a united voice for our members and give each business owner the ability to flourish. 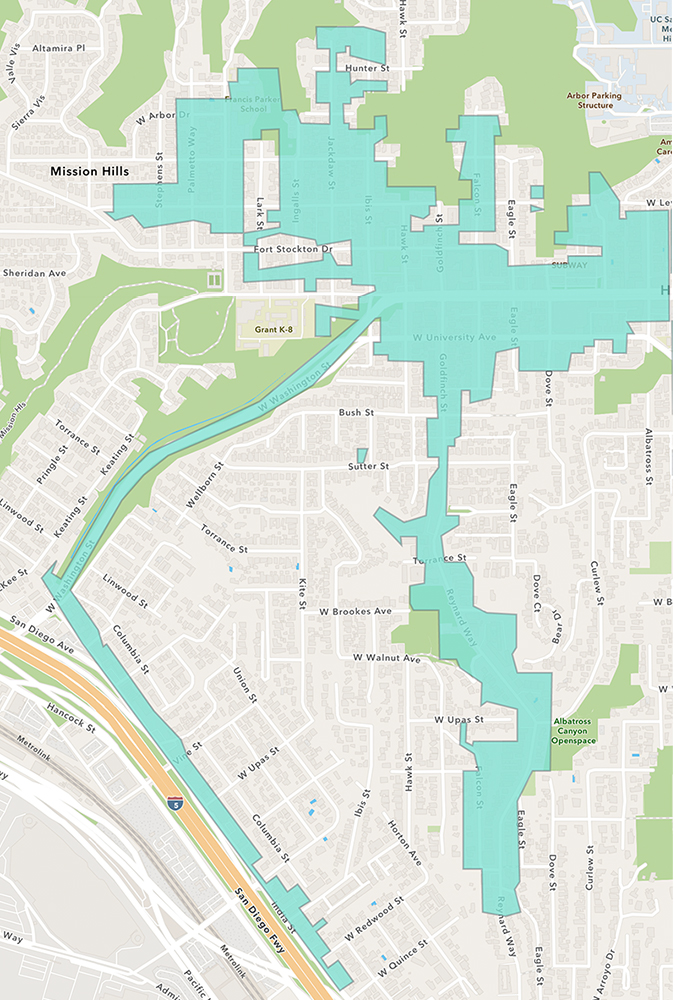 Meet our 2023 Mission Hills Business Improvement District’s Board of Directors.

Daniel, a San Diego native, is a licensed REALTOR®, Green, MRP with Team D&B at One Mission Realty. He serves on the Professional Standards Committee of the San Diego Association of REALTORS®. Daniel’s avocations include web and computer technology, social media and videography. Daniel has served as  President, Vice President, and, prior to joining the Board, as an advisor to the Mission Hills BID.

Jamaal is the Branch Manager, Assistant Vice President at the U.S. Bank Mission Hills office and has worked in the financial industry for 13 years. He looks forward to working with Mission Hills businesses and residents and continuing to make the neighborhood thrive.

Jesse is the owner of Backbone Floral located on Fort Stockton Drive in Mission Hills. She designs fresh and dried florals for events, daily orders, and local deliveries. Beyond flowers you can find her carefully curated vintage home goods, locally made cards and gifts. Jesse is a Mission Hills resident and loves her community!

Sarah is co-owner of Pizza e Birra, a family friendly pizza shop located on India Street. The Pizza e Birra crew delivers quality food and a quality experience to all. Pizza e Birra welcomes everyone with open arms. Many stumble onto Pizza e Birra and discover this hidden gem! Sarah is a born-and-raised San Diegan who understands the dining experience from both the patron and business owner perspective. In the past, she has served as a Board Treasurer for the Mission Hills BID.

Mike has worked in local startups, publicly traded companies, and currently has a home-based business, Michael Metcalf Consulting, advising clients on the acquisition of technology companies focused on the environmental and life sciences markets. He is a native San Diegan and 34 + year resident of Mission Hills.

Amra has been serving the Mission Hills community for over a decade as the owner of All American Tailor, a longtime family owned business. She plans to continue this tradition of delivering quality and service to the community in her role as a director on the Mission Hills BID.

Board Members from Previous Years

The Mission Hills BID President’s Circle is a way to engage notable individuals in the Mission Hills BID who have deep roots in our neighborhood and industry recognition as business owners, but lack the time to commit to participating in the day-to-day operations of the BID.

Carin Canale-Theakston is the CEO of Canale Communications, a national communication firm focused exclusively on the life science industry. Carin has lived in Mission Hills for over fifteen years and is active in the community including a past trustee of the Mission Hills Town Council and co-chair of the summer concert series. She recently purchased the building in Mission Hills where her business is located. She is married to Hillary Theakston and they have two girls, Piper and Ella.

John Ealy is a homeowner and business owner in Mission Hills. John owns 4 restaurants: one in San Diego, two in Santa Cruz and one in Maui Hawaii. He is involved in every aspect of the industry, including land owner, business development, restaurant design and city permit planning. The fundraiser Red Hot Heroes benefitting Fire Station 8 and the Mission Hills BID was the brainchild of Mr. Ealy.

Susan McNeil Schreyer began her career in Washington, DC, leading campaign seminars throughout the United States. She has worked with San Diego elected officials in their campaigns and as a member of their government staff. She directed San Diego READS, a partnership between San Diego City Schools and the San Diego Union-Tribune that became America’s largest literacy effort of its kind. She also served for eight years as national fundraising consultant for AVID, a college readiness system to increase school-wide learning and performance. Susan earned a Bachelor of Arts degree from the University of California, San Diego and a Master of Public Administration degree from San Diego State University.