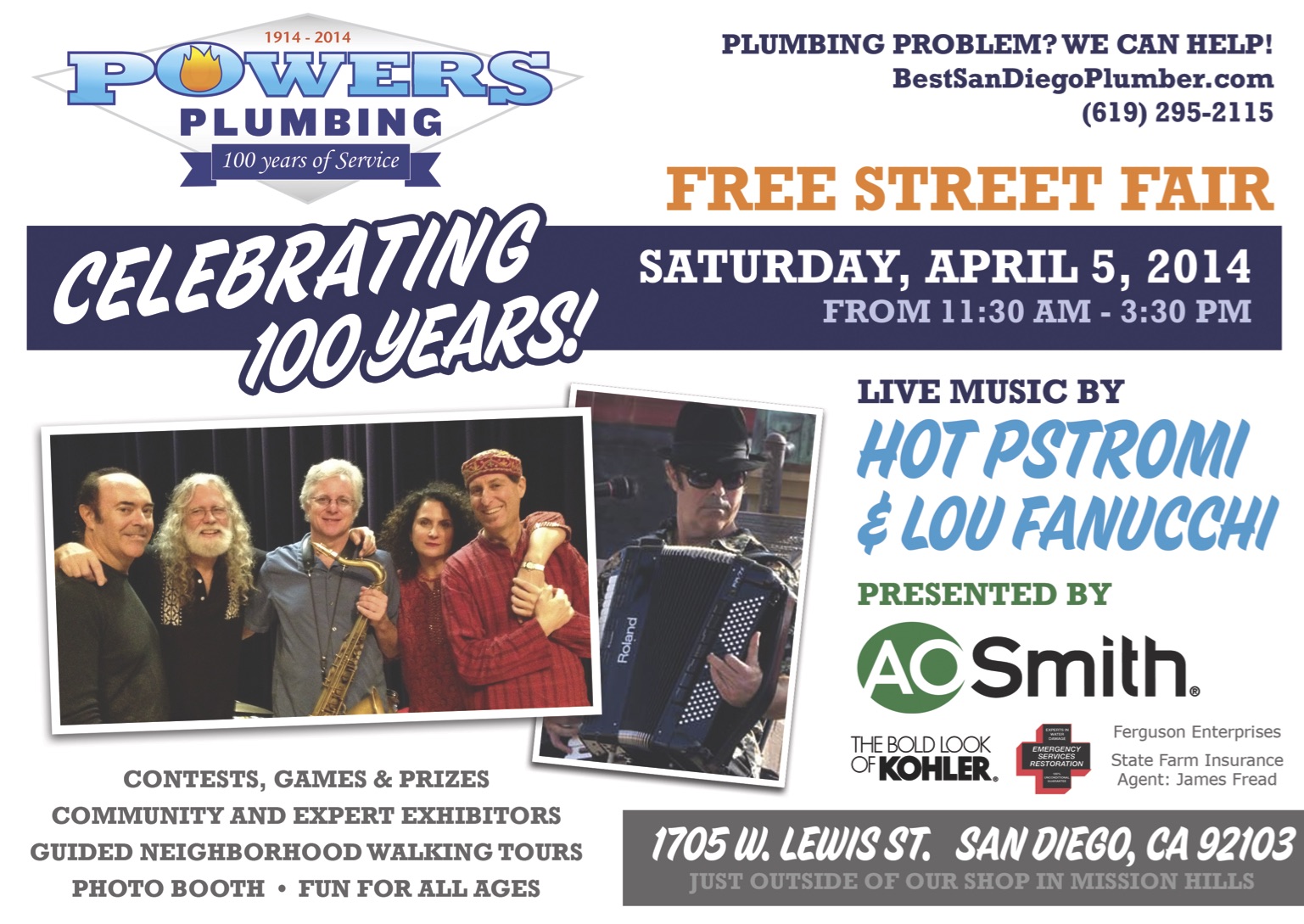 On Saturday, April 5 2014, from 11:30 AM to 3:30 PM Powers Plumbing invites you to celebrate its Centennial by attending an Innovation and Restoration Celebration.

The 100th year Centennial celebration will take place at 1705 West Lewis Street, in Mission Hills in front of Powers Plumbing shop in the West Lewis Shopping District. The event will include local community groups and organizations/exhibits, music, special mini-walking tours, a photo booth, and lots of opportunities for raffle prizes and fun. The vibrant West Lewis Street shops will also have specials and food to accompany the festivities.

Sometime in 1914, Luther Powers moved from Los Angeles and opened up shop downtown in anticipation of the local building boom because of the 1915 Panama Pacific Exposition. In 1917, Powers settled into Mission Hills and moved to 1619 West Lewis Street (now home to the Music and Mirror Ballet-Center West). Then in 1923, he commissioned master builder Martin V. Melhorn to design and build the now historically designated Spanish Revival shop at the corner of West Lewis and Stephens Street. Powers Plumbing shop/office has remained in continuous operation there ever since.

Today, Powers Plumbing stands on the shoulders of giants. It is a plumbing and heating contractor that has survived the century and thrives because of its consistent high quality work and community focus. In 2013, Powers began offering forced heating and air conditioning services besides plumbing, remodeling, gas, sewer and water re-pipes, water heater services, sewer line repair and drain care.

“We aim to remain a steadfast and trusted resource in our community.” Said Janet O’Dea, President of Powers Plumbing. “The centennial celebration enables us to reflect upon our legacy, give thanks to our clients and friends and also demonstrate support to one of our favorite local charities, Special Delivery.”

Powers Plumbing is asking guests to bring food or donations to support Special Delivery, a local non-profit organization and food bank that serves the medically challenged with food and meal services. In exchange for a donation participants will get a second chance raffle ticket for chances to win prizes donated from sponsors and local shops in the West Lewis Shopping District.

Our 100th anniversary celebration will include something for everyone. One of the highlights will be the music performed by Hot Pstromi, described as a fusion Klezmer band with Gypsy, World Beat and Balkan influences. Lou Fannuchi will also play a solo accordion set. The event is free. For more information visit our website or www.BestSanDiegoPlumber.com/100 or follow us on Facebook, PowersPlumbing.