The following is an excerpt from an article in the San Diego Union-Tribune, by Joshua Emerson Smith. The full article can be found here. As more developments occur and news becomes available, we will share on this page as it relates to parking and transportation to, from, and within Mission Hills. 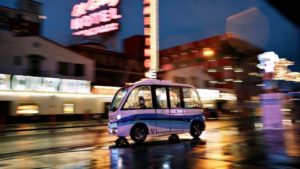 San Diego will join nine other locations around the country in a coordinated effort to test self-driving cars, local transportation officials announced Friday.

The region was chosen from 60 applicants by the U.S. Department of Transportation as a so-called proving ground for the new technology.

Officials selected San Diego because of its global reputation as a high-tech hub and extensive highway system, according to officials with the San Diego Association of Governments, which applied to the federal government for the designation along with Caltrans and the city of Chula Vista.

“This is great news for the San Diego region,” said county Supervisor Ron Roberts, chairman of SANDAG. “We are at the start of a new transportation era, and it’s tremendously exciting for our region to be part of a national initiative to foster innovations and best practices that will enable the safe deployment of driverless vehicles.”