One chapter in particular is focused on Business & Artists.

The book will be released on March 22, 2015, but you can pick up a copy in advance at Powers Plumbing. 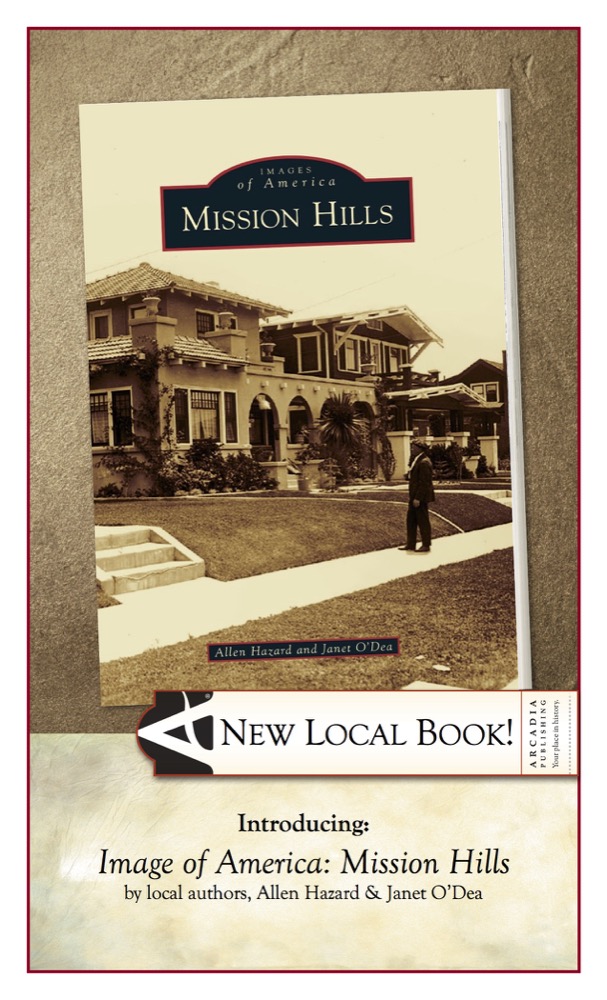 SAN DIEGO – March 4, 2015 – Mission Hills, one of San Diego’s most intact and delightful historic neighborhoods is featured in a new book by Allen Hazard and Janet O’Dea, long-time advocates, and historic preservationists of this handsome, early 20th-century community. The authors, who are married and live in a 1920 Craftsman-style home that is a city of San Diego historic landmark, will give a talk and sign copies of Images of America: Mission Hills (Arcadia Publishing, 2015) on March 22 at 12:30pm at historic Francis Parker School in Mission Hills.
During the 14 years Hazard and O’Dea have lived in Mission Hills, they have continuously researched and documented the community by collecting oral histories, vintage photographs, ephemera, and more. In this tranquil neighborhood rich in established gardens and lush finger canyons, streets lined with beautifully designed and handcrafted historic homes that are the result of the 1915 Panama-California Exposition and related building boom, which drew architects, builders and craftsmen to San Diego from all over the country.

SOHO is presenting this Mission Hills book launch as part of its ongoing celebration of San Diego’s historic neighborhoods.
“The story of Mission Hills is unique in many respects,” Hazard noted. It may be “the largest, most intact street car neighborhood where every major San Diego architect (with the exception of Irving Gill) and builder created a lasting legacy of early 20th-century architecture.” The little-changed neighborhood includes homes designed by or for many prominent architects, such as William Templeton Johnson, Cliff May, Richard Requa, Lilian J. Rice and Emmor Brooke Weaver; and builders such as David O. Dryden, Martin W. Melhorn, and Alexander Schreiber.

Writing and compiling this 128-page book led Hazard and O’Dea even deeper into neighborhood lore, as they knocked on countless front doors, discovered on a tax preparer’s office wall a rare early photograph of St. Vincent de Paul Catholic Church (a Mission Revival building razed in 1968), and reached into the seemingly bottomless photo archives of Henry Ford.

Ford’s business entered the Mission Hills story in a surprisingly bold stroke. The 1935 Neuner Brothers Ford dealership and filling station on Fort Stockton Drive (since converted to the Frame Station) was originally an eye-catching mini version of the towering Streamline Moderne Ford Building, just a few miles away in Balboa Park. Renowned industrial designer Walter Dorwin Teague was the architect of this iconic structure (now the San Diego Air and Space Museum) built for the 1935 California Pacific International Exposition.

Among the many residents and former residents who offered generations’ worth of information, charming family photos and invaluable records were Irene and Merrill Miller, Jr. Merrill Miller is the great grandson of Captain Henry Johnston, the skipper of a steamer that brought many newcomers to San Diego. In 1869, Johnston bought about 65 acres of a promontory he could see from San Diego Bay, the prospect now known as Mission Hills. He did not live to build a house there, but his stepdaughter and other descendants made it their home and subdivided the portion Johnston bought, calling it Inspiration Heights.

Along with famous forces that helped shape early Mission Hills and the 1915 Exposition, civic leader and developer George Marston, nurserywoman and botanist Kate Sessions, streetcar and sugar mogul John D. Spreckels, the authors include some new discoveries in their book.

Acclaimed painter and Works Progress Administration muralist Belle Baranceanu lived and worked for a time in Mission Hills. The Mexican girl portrayed drinking from a fountain on a Spanish Revival glazed-tile plaque at businessman Mariano Escobedo’s Sunset Boulevard home was inspired by an 1875 oil painting by Léon Bonnat, Roman Girl at a Fountain. A vintage aerial photograph (just one among dozens previously unpublished in the book) presents a stark summary of change at the heart of Mission Hills. “This photograph really allows one to see the changes over time and the essence that has remained,” O’Dea noted.

“We’re very pleased to help launch this significant book because Janet and Allen are dedicated, tireless SOHO members who have led or serve on multiple SOHO committees for years,” Alana Coons, SOHO’s director of education and communications, said. “I do not know of another book dedicated to Mission Hills, as incomprehensible as that may be, and we applaud their ongoing work to research and preserve their Mission Hills neighborhood.”

Tickets for the lecture and a copy of the Mission Hills book are $25; $10 for the lecture only at Francis Parker School, 4201 Randolph Street, San Diego. Click HERE for more details and to purchase tickets or call (619) 297-9327.